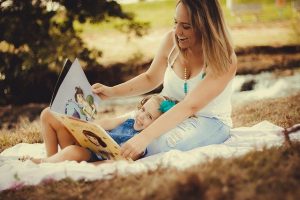 Books written by people with CMN or a family member:

Here’s the story behind the story: This book was written by a mom of two cuties born only 1.5 years apart. Her second child was born with a large mark called congenital melanocytic nevus covering a large part of her face. The parallels of having a child born without and then one born with a visible difference inspired the creation of this book. As a person who never had to face the world looking differently than her peers, it was eye-opening to experience the stares, comments, and interactions that came with a visible difference. The purpose of this book is to bridge that gap taking a very kid-friendly approach to explain visible differences, kindness, and what to do when you see someone who looks different than you.

At Least She Has a Pretty Face: Growing up with a Giant Congenital Nevus, by Lori Clay-Porter , 2019

My hope is that this book will help the readers to overcome weaknesses and obstacles and will motivate them to live a fuller life. In a world that demands perfection, I feel that this book will interest, amaze, and inspire. My deepest wish would be for this book to help and uplift people born with a giant congenital nevus and all people born with unusual birth defects, disabilities, or deformities of any kind. People, in general, are fascinated by others that are different. I learned very early to be compassionate to the problems of others and to accept my own problems, and then later in life, I decided to live life to the fullest, appreciating each and every day. I am living a completely normal life. In fact, I am living a fantastic life with many adventures which I share in my writing.

The SpottedGurlDiaries is about a girl who lives with a skin condition called Congenital Melanocytic Nevi. This skin condition is a round oval-shaped patch of skin usually referred to as a mole. My book talks about my struggles and how I overcome them.

Shachar is having her 10th birthday, but she’s not celebrating alone. Kuti is celebrating with her – one of many beauty marks decorating Shachar’s whole body. The problem with Kuti is that she’s located inside Shachar’s head, which causes all kinds of problems. “Sometimes I want to ask her why she chose me, or what brought her to me, but I know that’s not important… because she did choose me, and she’s with me now.” That’s why Shachar wrote this book – a book about love and acceptance, for yourself and also for those who are different.

The Mark She Kept: A Woman’s Journey to, Living her Purpose Courageously! Ferrin Roy, 2017

Do you love yourself? Can you gaze into a mirror and smile despite how many people feel you should be ashamed of your uniqueness? Well, Ferrin has created a shatterproof mirror which reflects boldness, distinctiveness, confidence, and self- realization. While gazing into her mirror, you may only notice the obvious, “a birthmark,” but she has survived unforgettable experiences that were intended to destroy her internally. Throughout this book, Ferrin shares authentic experiences she has encountered throughout her childhood and adulthood living with her birthmark. These experiences will not only raise awareness but prepare you for living a normal life in a judgmental world. Ferrin challenges you all to, ”Unveil your Face, and Raise your Head High!” You are distinguished and beautiful. Your uniqueness may not be ordinary, but that alone makes your life more fascinating!

Dafnis was born in 1998, covered with lots of nevi. His condition is named Congenital Melanocytic Nevi (CMN). Within a month, he went for surgery to remove as many as possible. In his early childhood, he had four surgeries. Complications appeared but weren’t diagnosed correctly. He has had seizures, caused by Neurocutaneous Melanocytosis (NCM). NCM is a rare and complication of CMN and can be fatal. He outgrew his seizures. He became a joyful kid with a good sense of humor. Until January 2012, he came home from school nauseous and dizzy after the sports class. It was the beginning of a six month battle against NCM. Even then, he didn’t lose his sense of humor. In July 2012, he passed away at the age of 13 years. His last wish was not to be forgotten. He left behind an older sister, younger brother and both his parents. During his battle his mother wrote e-mails to keep friends, family, and medical staff informed.

The book belongs to a therapeutic program for children with CMN developed by association Anna. The book is written in French. It tells the story of Anna, a little girl with a giant nevus, who discovers that her difference can become her unique identity.

Books written by people with a similar condition or a family member:

What’s that on your face, there is something unique about everyone, Ashley Ide, 2016, Paper copy Dutch/English: contact Naevus Global

“I have been fortunate that Sturge Weber UK charity has agreed to fund the production of the book and help me realize a dream and an ambition of mine to create something that we, as parents, can use to help our children settle in at preschool, school and also in society. I really feel that if we can educate the next generation to be more accepting of differences, then our children, and future children, will be accepted and more understood.” – Ashley Ide

R. J. Palacio wrote Wonder after an incident where her son noticed a girl with a severe facial difference and started to cry. Fearing he would react badly, Palacio attempted to remove her son from the situation so as not to upset the girl and her family but ended up worsening the situation. Natalie Merchant’s song “Wonder” made her realize that the incident could illustrate a valuable lesson. Palacio was inspired by Merchant’s lyrics and she began writing. She named the book directly after the song and used the song’s chorus as the prologue of the first chapter.

35 books that teach empathy and kindness